*The 2019 Tony Award nominations were recently announced. Below is a complete list.

Best Musical
“Ain’t Too Proud: The Life and Times of the Temptations”
“Beetlejuice”
“Hadestown”
“The Prom”
“Tootsie”

Best Play
“Choir Boy”
“The Ferryman”
“Gary: A Sequel to Titus Andronicus”
“Ink”
“What the Constitution Means to Me”

Best Revival of a Musical
“Kiss Me, Kate”
“Oklahoma!”

Best Leading Actress in a Play
Annette Bening, “All My Sons”
Laura Donnelly, “The Ferryman”
Elaine May, “The Waverly Gallery”
Janet McTeer, “Bernhardt/Hamlet”
Laurie Metcalf, “Hillary and Clinton”
Heidi Schreck, “What the Constitution Means to Me”

Best Featured Actor in a Play
Bertie Carvel, “Ink”
Robin de Jesús, “The Boys in the Band”
Gideon Glick, “To Kill a Mockingbird”
Brandon Uranowitz, “Burn This”
Benjamin Walker, “All My Sons”

Posted by donloeslowdown.blogspot.com at 11:40 PM No comments:

For more than 20 years, Roy "Reno" Wilson has wanted to portray legendary trumpeter, composer and singer Louis Armstrong.  Imagine his surprise when his phone rang as he sat in his home one day – literally holding a trumpet and a handkerchief in his hand (Armstrong’s moniker) toiling away on his own show about the famed musician.  It was his agent. He had an audition for a role in an upcoming drama called, Bolden, set for nationwide release May 3. 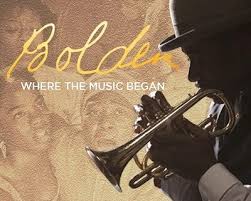 Bolden is the story of Buddy Bolden, a little known New Orleans musician who is credited with creating the musical art form now known as jazz.

“I just knew this role was mine,” said the veteran actor, best known for his roles in The Cosby Show, Mike & Molly and now Good Girls. “When the casting director came in I said, “Hey (in Armstrong’s voice), good evening.”

He got the part!

The only thing left for Wilson was for them to make the part bigger.

Wilson’s love for music came honestly. He grew up in Brooklyn, NY with a father (Roy Wilson) who was a blues organist and a mother (Shirley) who was an opera singer.  The musical roots were firmly planted.

When you talk to Wilson his zest for life and love of his career beam through his every word. He has an easy-going spirit and a quick wit that boosts his enormously likable personality.


I recently caught up with Wilson, a married father of two, to talk about his career, Bolden, and his high regard for Louis Armstrong.

DD: I must admit, I had never heard of Buddy Bolden before this movie. Had you?

RW: Who has?  No. He was unrecorded. There is one grainy ripped up picture. All we know are stories. What’s amazing about it is, we’re talking about him.

DD:  What drew you to this project?  What was the pitch?


RW: The coincidence is before I got the script, I was working on my own show about Louis Armstrong. I’m holding a trumpet and a handkerchief.  My agent had me auditioning for a creole. I go to the audition. I got my suit and trumpet. I sign in “pops.”  I knew this was mine. The casting director comes in and I said, “Hey (in Louis’s voice). Good evening.” We were crying. I told them, ‘You gotta make the part bigger.’

DD: What are your thoughts about Bolden the person?

RW: I think Buddy Bolden was an eccentric dude who was really creative. He was hearing things that other people couldn’t hear at that time. When you’re the first, like Beethoven, Van Gogh – they all had something going on. Buddy can be added to that list.

I see Buddy Bolden as that kind of a character. He was born at a time when it wasn’t cool to be like that. He was a little bipolar.

RW: It starts with the music. It’s all about the music. All I knew was Hello Dolly and What a Wonderful World. In 1926, he was the man. He was creating and innovating. He was the first pop star. He was also a huge weed smoker. My goal is to bridge the gap between early jazz and hip-hop.

DD: How important is music to you?

RW: My dad was a blues organist. His name was Roy Wilson. He had a stroke while performing in Manhattan. I was four-years-old when it happened. I traveled with my mom. I was an opera kid. I have played the piano since I was four. I have perfect pitch. When I picked up the trumpet, I got perfect tone because I have perfect pitch.

DD: Why should people spend their money to see Bolden?

RW: It’s visually, a well, for the senses it’s a stunning film. What Wynton [Marsalis] did is off the hook.  The music is pleasing and hot.  I love movies where you see black people in shadow and darkness. It’s more realistic to see black people lit in warm colors.  They are beautifully lit in this film. It’s pleasing to watch. It’s also a way to incite them to get into some early jazz.

DD: Why doesn’t jazz get respect?

RW: You’re right. Jazz gets no respect. It’s something Louis [Armstrong] dealt with his whole life. It was mostly white people at his shows. He was frustrated that black people didn’t come to his shows. In 2019 maybe this will stimulate people.

DD: Why did you want to be an actor?

RW: It’s kind of the only thing I’ve ever done. I did plays in elementary school.

DD: What was your first show?

RW: My first one was The Glasses Man. I was in 3rd grade. I gave rose-colored glasses to everyone in the world. That’s pretty much how I live my life.

DD: You’ve played a cop a couple of times. What is it about cops?

DD: You’ve been a part of some pretty good shows. Has it been luck, or are you just that good?

RW: No, I am that good (laughter). Prior to that, an argument could be made that I was a pilot death. I’ve shot 20 pilots - 14 series. Mike & Molly was the first to go past a season. It would be like – “All shit, Reno is in our show –we’re not going to go past six shows.”

RW: I had no idea. No idea what to expect. My first job was The Cosby Show. I was working at a conservatory at the time. I was quite content doing that. I end up doing one episode of Cosby, then another and another. Mr. Cosby was very supportive of me. He gave me some of my first lessons in the industry. I had a lot of naivete.  I am excited. I don't know why. I love what I do. I love living in Los Angeles. It does not get old.


Posted by donloeslowdown.blogspot.com at 9:27 AM No comments: