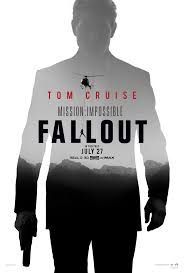 “Your mission, should you choose to accept it..”

Whenever Tom Cruise is anchoring an action movie, you can bet it’s going to be good – really good.

Once again Ethan Hunt, played by Cruise, takes on a mission to save the world. This time, due to a mistake Hunt and his team made, three plutonium balls (globes) have gone missing. Now it’s a race against time to right a wrong.  Hunt must thwart a nuclear threat.

This is classic Cruise. This is Cruise at his best. At 56, he hasn’t missed a beat. He can still run, jump and kick ass with the best of them.


The stunts are unbelievable in Fallout. This is the movie that Cruise was filming when a stunt went wrong and he broke his ankle jumping from the rooftop of one building to the next.  He landed a bit awkwardly – shutting down production until he was healed enough to continue.

The skydiving sequence in this film that Cruise and Henry Cavill, (CIA agent August Walker) have is a true adrenaline rush. It’s nuts! Then the two have a helicopter sequence that is unbelievable. It’s crazy! It’s interesting how Cruise’s Hunt is a bit like Superman – when Cavill (who still has the physique, gait, and demeanor of Superman, is in the film).  Essentially you have Superman (Cruise) fighting Superman (Cavill).

Hunt’s team (franchise regulars) is back and in rare form. They bring the noise and the funny.

The gang’s all here. Ving Rhames is back as  Luther, Simon Pegg is back as Benjy and  Alec Baldwin, who was the former CIA director Alan Hunley, is back. This time he is the secretary of IMF.  Ilsa (Rebecca Ferguson) is also back. She appeared in the fifth installment.


A welcomed surprise and cool highlight is the appearance of Julia (Michelle Monaghan), Hunt’s former wife. We haven’t seen her since Mission Impossible 3.

This film is one jaw-dropping moment after another.

The setting for much of the film is Paris. It’s been reported that Director Christopher McQuarrie said he chose to make the film in Paris after the November 2015 terrorist attacks there reflected a city he didn’t recognize. Cruise agreed - to show the world it was safe. McQuarrie, the first director to make a return visit to the franchise, and Cruise, his partner in crime, push the envelope with this edition. The result is being called the best of the Mission Impossible series.

Ever since 1996 when the first Mission Impossible hit theaters, Cruise has been holding it down with impressive performances, stupendous, eye-popping stunts and heart-stopping races on foot, in cars, trains, planes, helicopters, boats, motorcycles and any other mode of transportation.

Remember Solomon Lane (Sean Harris), the villain in Rogue Nation? Well, he’s back again.  This time he’s in custody. He still doesn’t like Hunt. In fact, he’d like to take him down by any means necessary.

Walker, Cavill’s character is a bit of a mystery. He jumps back and forth throughout the film as a bad guy and a good guy. The same with CIA director Ericka Sloan played intensely by Angela Bassett. Is she on Hunt’s side or is she against him. You have to buy a ticket

Vanessa Kirby (The Crown) is a delicious, new character named Alana, who goes by the name White Widow. Her role is so delightful, I’m sure we’ll see her in subsequent MI films.

Posted by donloeslowdown.blogspot.com at 12:03 AM No comments: 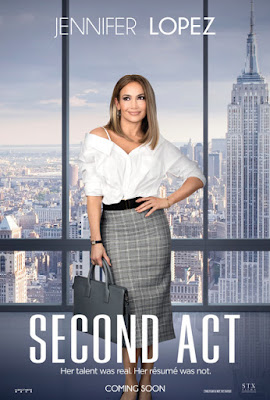 Second Act is a comedy in the vein of Working Girl and Maid In Manhattan. Jennifer Lopez stars as Maya, a 40-year-old woman struggling with frustrations from unfulfilled dreams. Until that is, she gets the chance to prove to Madison Avenue that street smarts are as valuable as book smarts and that it is never too late for a Second Act.

In Theaters November 21, 2018
Trailer: https://www.youtube.com/watch?v=YsVo5necW6Q
Posted by donloeslowdown.blogspot.com at 9:32 PM No comments:

The Little Miss African Pageant (LMAA) is first and foremost an educational program cleverly disguised in a pageant format whose mission is dedicated to the intellectual success of your African American girls.

“Within each girl, is the promise of unlimited possibilities, and the pageant is a vehicle for bringing that potential to the forefront," says Lisa Ruffin.

For the past 24 years, dozens of girls between the ages of 6-12 years old have participated in this program, hundreds of scholarships have been awarded, and lasting memories have been created for the young academic and intellectual princesses. While some of them come from strong supportive families, the majority of them come from under-served, single-family homes. The pageant provides an early introduction to the arts and training in public speaking while promoting individual creativity and stimulating a heightened cultural understanding. For more information: www.littlemissafricanamerican.org

Posted by donloeslowdown.blogspot.com at 10:24 AM No comments:

You haven’t seen a jungle quite like this one.

Rudyard Kipling’s Jungle Book has long been a fan favorite. It’s the story of adventure for both young and old audiences alike.

The story about Mowgli, a little boy raised in the jungle by wolves, is brought to life in Jungle Book, a family-friendly theatrical production currently playing at the Pasadena Playhouse through July 29.

The presentation starts off with Mowgli asking the audience if they’d like to go on a journey through the jungle. Of course, they say, “yes.”

From there, Mowgli begins to spin the tale of how he, now grown and living in New York City, went from living in the jungle to now working in the Big Apple.

It’s a harrowing story that ultimately ended with him living amongst wild animals that teach him about survival.

Everyone knows the story.  A little boy named Mowgli, whose father is killed, is left in the jungle and raised by a pack of wolves. They are the only family he’s ever known. Mowgli becomes very comfortable living amongst the animals, well, all but one. Shere Khan isn’t exactly a fan.  He would love nothing more than to kill the human because he hates mankind.  But Mowgli has some cool friends. He has a panther named Bagheera and a too cool for the room bear named Baloo, watching over him.
All of this is presented in an incredibly creative, innovative and enjoyable production complete with music, projected images, screens, interactive technology, animated characters (think Lion King) and more.

There are several occasions when there is audience participation.

It’s clear that the show is geared toward a young audience. But don’t be fooled, adults will find Jungle Book a thoroughly entertaining show.

There is a lot going on in this production. Except for Valayil, all of the other actors portray three or more of the characters either through voicing, projected images or by simply taking off the head of one character and donning another right on stage.

Screens are turned, different images are projected, two boards are positioned in various areas of the stage for a myriad of reasons. They could be flown in to be the mountains in one scene, the grass in another, the entrance to a dungeon the next. It all comes together quite easily.

Co-creators and directors Craig Francis and Rick Miller have brought to life a wonderful children’s story.

Valayil, accompanied by his youthful smile, is a delight with just the right amount of energy and enthusiasm.

The other actors are just as delightful, evidenced by the joyous squeals of the children in the audience during the opening night performance.

Frankly, I have found Jungle Book to be a scary story. Kipling's classic set of tales has seen many iterations including Disney’s animated version and Jon Favreau’s 2016 movie version.  For me, all the versions are a bit unnerving, especially whenever the sinister snake, Kaa, appeared.

Besides being a story of survival, family, determination, and loyalty, Jungle Book also has a message. For instance: Mowgli's refusal to be a part of the segment of mankind that kills animals.

Jungle Book is written, co-created and directed by Craig Francis and Rick Miller, adapted from the works of Rudyard Kipling, a Kidoons and WYRD Production in association with The 20K Collective.

Posted by donloeslowdown.blogspot.com at 10:14 PM No comments:

Denzel Washington Kills It In "Equalizer 2" 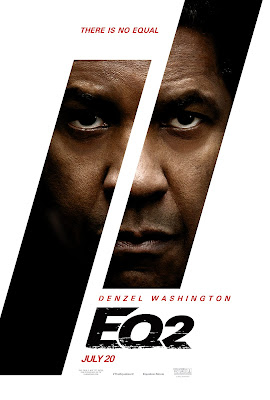 Denzel Washington is not taking any shit in his old age.

All of his characters in those movies were proficient at whippin ass.

Gone are the heartthrob roles that made him a matinee idol. He has matured, and in so doing, has changed his image.

Washington is known for portraying memorable characters. Robert McCall is no exception.

In Equalizer 2, his first-ever sequel, Washington, once-again, continues to rain down justice on bad guys who prey on the weak.  The film hits theaters nationwide on Friday, July 20.

Well, the bad guys in Equalizer 2 obviously didn’t get the memo.  Just like in the first installment in 2014’s Equalizer, Washington goes after the bad guys with a vengeance. In fact, he gets downright medieval.

The film opens when McCall, disguised as a devout Muslim, goes on a rescue mission near Turkey to recover a little girl who has been kidnapped by her father.

To his credit, while he severely deals with the father’s friends, McCall gives the man a choice to return the child or experience his wrath.  He tells the father - “There are two types of pain in this world: pain that hurts and pain that alters.”  BOOM!   We don’t really know what happens to the father. What we do know is that the little girl is returned to her mother.

McCall exposes his soft side by chauffeuring an elderly Holocaust survivor (Orson Bean) who is looking for his long, lost sister.

When his friend, played by Melissa Leo, becomes a victim of some thugs, McCall sees nothing but red.

You don’t want to see him click his stopwatch. That’s his schtick. Every time he gets ready to cause mayhem and whip ass, he removes his glasses and clicks his stopwatch. For some reason, he didn’t do it in the last fight sequence.

WATCH THE TRAILER!
If he’s in a gracious mood, he’ll give you options on how he’s going to hurt you. For instance, he’ll let you pick which hand he’s going to break. He may even ask you which hand you write with.

Ironically, a low-key guy, McCall, who is believed to be dead by everyone except a handful of people, lives in an ordinary apartment and even has friends who live in the same complex. There is a woman who loves to garden and a teenager (Ashton Sanders Moonlight) who looks up to McCall but still has one foot in the streets. McCall, who makes his living as a LYFT driver, takes the kid under his wing.

As always, Washington delivers an even-handed performance. He can be calm and patient one minute – and cause helter-skelter the next.

The movie is extremely and graphically violent. It’s over-the-top gratuitous. It’s the kind of violence that makes you wince, close your eyes and even cover your ears so that you don’t hear bones breaking.

The last 15-20 minutes of the film plays out like a Fortnite video game. And, unlike the previous scenes, McCall doesn’t push his stopwatch. Maybe he knew that last sequence, which is gruesome, would take a bit more time than the others.

Director Antoine Fuqua, who is working with Washington for the fourth time, is good at creating a dark, moody, gritty and suspenseful drama.

The tone, the feel, the music, the anxiety and anticipation that he creates is intense.

That being said, just why all of this violence and mayhem is happening is never really made clear.

Equalizer 2 is Rated R (for brutal violence throughout, language, and some drug content). Running time: 2 hours.