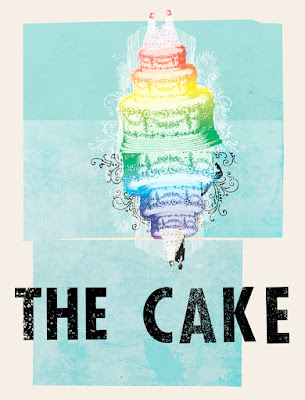 A cake is made up of a number of ingredients. In order for the cake to rise, stand on its own and taste good, all of the elements need to come together.

The concept is the same for people and life. The world is made up of a diverse population, which has to rise, stand on its own and even be full of flavor if the world is to live as one.

In Bekah Brunstetter’s The Cake, currently playing at the Geffen Playhouse in Westwood, said “Cake” is central to an issue that is in the news today.


The story, which takes place in present time, goes like this. Della, played by Debra Jo Rupp, is a devout Christian who owns a popular bakery in North Carolina.  She has a huge, pleasant and naturally-charming personality. One day her best friend’s daughter, Jen (Shannon Lucio) comes to town and asks if she could/would bake her wedding cake. Della is elated until she finds out that her friend’s daughter, is in a same-sex relationship with a woman named Macy (Carolyn Ratteray).  Because of her faith, Della finds it hard to choose between her beliefs and her family. She decides that she can’t make the cake because it would be condoning something that goes against her views.

Recently, in the news, Baker Jack Phillips, owner of Masterpiece Cakeshop in Colorado received notice that the U.S. Supreme Court issued a limited ruling in his favor after he refused to make a wedding cake for a same-sex couple. He is suing Colorado after officials ruled against him in another alleged discrimination case in which his shop refused to make a cake celebrating a gender transition.


Della isn’t suing anyone, but she is sticking to her guns when it comes to her faith. She continues to tell Jen that she loves her and hopes she understands that her beliefs won’t allow her to turn a blind eye.

In the meantime, Della has some other concerns. She is looking forward to competing in a reality TV baking show while worrying about her passionless marriage with her hubby Tim, played by Rod McLachlan. He hasn’t “touched” her in 10 years, not even a tongue kiss – and Della wonders why. When he explains it to Della, she quickly tries to squelch his concerns.


Macy and Jen have a loving relationship, although they occasionally butt heads when Jen praises her hometown for its warmth. Macy is not feeling it, nor does she have any affection for the close-knit town.

Brunstetter (supervising producer - This Is Us) has written a touching, poignant, thought-provoking piece that touches on the many levels of human emotion.

Each character in the show digs in their heels when it comes to defending their points of view. While they may understand and respect someone else’s opinion, they are not ready to abandon their own – even for a loved one. They all try their best not to judge – but, ultimately, it creeps in.

Macy and Della spar several times in the 90-minute, no-intermission show, with no clear winner. It’s actually like watching a fencing match. Macy tries to bring Della into 2018 but to no avail. Della just reiterates that the Bible, and the way she grew up, prevents her from being unsteady in her beliefs. It’s interesting to watch the back and forth.


Macy is an intelligent black woman with natural hair, who is confident in who she is and determined to not be put in a box because she doesn’t conform to what some think is the norm.  Della is a conservative, fun-loving ball of energy that is steadfast in her principles. Watching the two hold their own is the glue that keeps this show moving forward.
Rupp brings an even balance of comedy and drama to the role. Her personality fills the stage.  Good performances all around from the supporting cast. Kudos to Morrison Keddie who provides off-stage vocals.

At times the show is heartbreaking, but this is where we live. It’s a tough subject to take on, but Brunstetter does a good job of presenting all sides.

Times, they are a-changin'.

Rush tickets for each day’s performance are made available to the general public 30 minutes before showtime at the box office. $35 general/ $10 student.