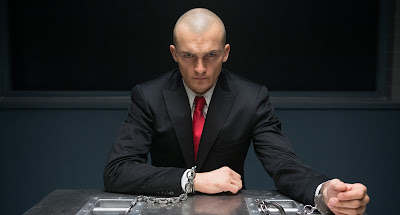 In Hollywood someone could go through 46 agents before they find one that can get the job done.

The body count during the first five minutes of Hitman Agent 47, Aleksander Bach’s debut action film, is staggering but it’s merely a sign of things to come.

A reboot of “Hitman” (2007) adapted from the IO Interactive videogame about a genetically engineered contract killer, this Agent 47 is a sleek and slick offering starring Rupert Friend in the title role.

The nattily dressed Agent (white shirt, red tie and black suit) has a steel glaze, a robotic walk and no emotions. Incredibly accurate with his targets, it’s not quite cut and dry in the beginning of the movie if he’s actually a good guy or a bad guy.

His assignment, if he chooses to accept, (oops, wrong movie) is to go to Berlin to find Katia (Hannah Ware), a girl who can possibly lead him to the scientist who came up with the formula to make an army full of Agent 47s.

Enter John Smith, or is that his real name?  Smith, played by Zachary Quinto is also looking for Katia.  His character starts off one way and then veers off in another direction.

On the way to finding the man, Agent 47 and Katia encounter what seems like millions of bad guys – and takes them all on – like the bad asses they are!

It turns out Katia has some skills herself. She can see things. She can see a lot of things, which gives her the power to over power some of the bad guys.

The minutiae gets a bit cloudy and confusing.

When Agent 47 and Katia find the man, a new wrinkle is thrown into the mix. His identity makes everything a bit more complicated.

Once he’s found, what ensues is cinematic chaos.  The mayhem and violence is mind-boggling.

While the film has a modern feel and has all the trappings of an action thriller, it fails to set itself apart from the other offerings.

Posted by donloeslowdown.blogspot.com at 11:54 PM