Racism At The Core Of 'Citizen: An American Lyric' 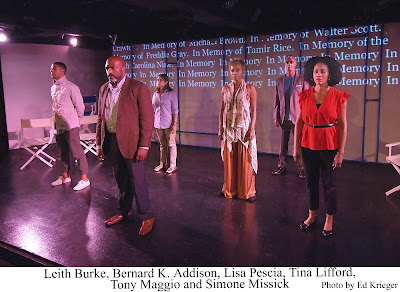 That is just some of the haunting dialogue in Claudia Rankine’s emotional piece Citizen: An American Lyric, now playing at The Fountain Theatre through September 14.

While she reveals those are not her words, but rather can be attributed to other authors, including James Baldwin, the power behind those words don’t dissipate. In fact, they engulf the theater.   The words are stinging, but timely, given today’s continuous headlines of black men being killed by white police officers.

Sunday was the world premiere of Stephen Sachs’ stage adaptation of Rankine’s tome.

This book is the long-awaited follow up to her groundbreaking book, Don’t Let Me Be Lonely: An American Lyric. 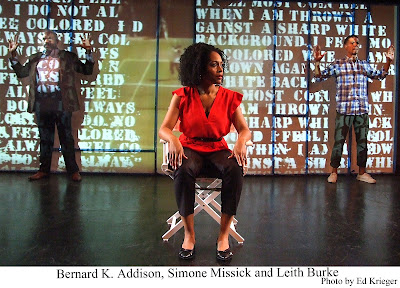 The show opens with the revelation - When you are alone and too tired even to turn on any of your devices, you let yourself linger in a past stacked among your pillows.

Be warned about what happens when the devices are switched off.

A white father takes the middle seat on a plane so that his daughter won’t have to sit next to a black man.

A white woman is frightened and on the offensive when a black man rings her doorbell only to realize he has an appointment with her.

When her black friend shows up a bit late, the white friend exclaims, ‘why are you so late you nappy headed hoe’?

A white man says to his black buddy, ‘they are making me hire a person of color when there are so many good writers out there.’

And then there’s the story of the woman on a train. She would rather stand than sit next to a black man. People notice there is one seat left, but the woman doesn’t budge. Maybe she’s about to get off of the train. The space next to the man is the pause in a conversation you are suddenly rushing to fill. You step quickly over the woman’s fear, a fear she shares. You let her have it. When another passenger leaves his seat and the standing woman sits, you glance over at the man. He is gazing out the window into what looks like darkness.

These are just some of the hard-hitting vignettes in the 75-minute presentation.

All of those are moments of unintentional, or subtle forms of racism plaguing society. 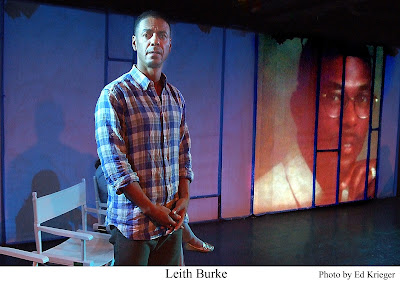 Rankine’s writing is thought-provoking and eye-opening. It’s a collection of works chronicling the life that most black people live on a daily basis.

At one point in the show, Rankine and Director Shirley Jo Finney pay homage to the many black people who have senselessly lost their lives - by displaying their names visually upstage center while an actress rattles off the names.  The list seems to go on forever. It’s an even more emotional moment as pictures of the victims appear.

Finney is known for bringing magic to her productions. She doesn’t disappoint with this piece. Her direction is fluid, vast, creative, expressive and non-traditional.

Finney makes good use of the stage. She uses the six actors (four black, two white) as stagehands who quickly and with precision move chairs and themselves around the stage to signify a scene change.

All of the actors deliver vibrant, emotive performances even with dialogue that can only be described as fiery, troubling, unruly and damaging. Ok, to be honest it’s racist! 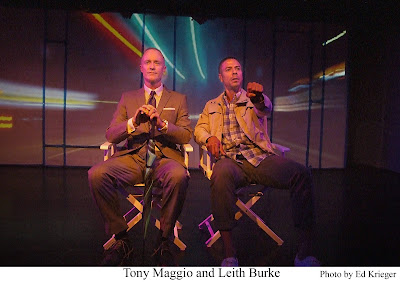