Martin Luther King Jr. Is On 'The Mountaintop' 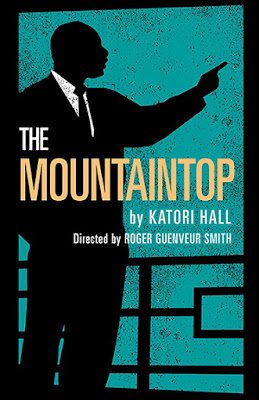 No one knows, with any certainty, what Martin Luther King Jr. was thinking when he was alone in Room 306 the night before he was assassinated at the Lorraine Motel in Memphis.

Playwright Katori Hall (Hurt Village, Children of Killers, Remembrance) doesn’t know, but she has taken a stab at it by giving a fictional account of the possibilities in her drama/comedy, The Mountaintop, currently enjoying its Los Angeles premiere at the Matrix Theatre in Hollywood.

The show, directed by actor/writer/director/Obie Award-winner and all around entertainment sage Roger Guenveur Smith, draws back the curtains to the room King stayed in and offers some albeit conjured and controversial, yet poignant and sometimes humorous accounts of the civil rights leader’s thoughts and emotions during his last night on earth.

The Mountaintop takes place April 3, 1968, in room 306 of the Lorraine Motel in Memphis, Tenn. King, aptly played by Larry Bates, was there in support of striking sanitation workers. He had just finished giving his legendary “I’ve Been To The Mountaintop” speech at a crowded Mason Temple in Memphis. 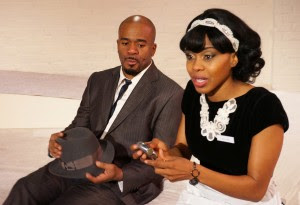 It's a rainy/stormy night as he walks into the empty motel room. He's a bit tired from the day, but he’s already prepping his next speech.

“Why America is going to hell?, he asks talking to no one in particular, but rather working out the answer internally.

Looking slightly weary, King begins to check the room for bugs – no not insects, but rather the microphones that may have been planted in case he was in the mood to reveal some of the movement’s game plans. It was during that time that King was being bombarded with everything from the consequences of denouncing the Vietnam War, to civil rights, worker’s rights, economic issues, his family and more.

But what was he thinking? Of course, we’ll never know. Was he scared? Was he in a good mood? Was he second-guessing himself? Did he trust anyone? Was he prepared to die?

Before settling in for the evening, King calls for room service to deliver a cup of coffee. It’s brought to his room, rather quickly, by a mysterious hotel maid played wickedly by Danielle Truitt. The maid is not only attractive, she is dressed somewhat like a classy French maid. A bit of a seductress with a real ease for tease, she questions King, gives him praise and even plies him with squares (cigarettes).

But, there’s something about her that just doesn’t feel right. King would soon discover why. 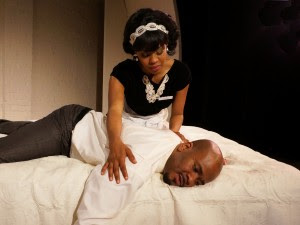 Katori Hall has written some captivating dialogue, for her vibrant, lively characters who are whole with their flaws and issues. King, a bit of a tease himself, is written with the characteristics of an ordinary mortal. He has strengths. He has weaknesses. He’s vulnerable, uneasy and yields to some temptations – namely alcohol and cigarettes. The real King was rumored to have been a womanizer. Hall takes the character to the edge and leaves him teetering precariously.

With Roger Guenveur Smith (A Huey P. Newton Story, Juan and John, Rodney King, Frederick Douglass Now) at the helm, the artistic and dramatic aspects of the play are advanced. His approach is fluid and creative - resulting in a satisfying totality that is enhanced significantly by his evenness of execution.

Neither Hall nor Smith felt the need to place King upon a hallowed pedestal. Instead, through dialogue and direction, King’s super hero façade collapses under the weight of his imperfect humanness.

Both Bates and Truitt, who clearly have chemistry, deliver solid performances. Their cat and mouse, ‘will they, won’t they’ romp around the hotel room is edgy and, due to his marital status and pastoral station in life, produces an uneasy sexiness. 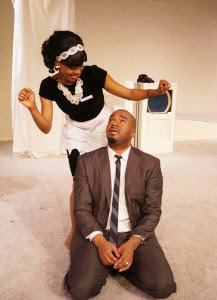 The Mountaintop received its world premiere in London at Theatre 503 before transferring to Trafalgar Studios in the West End, where it won the 2010 Olivier Award for Best New Play. The 2011 Broadway production starred Samuel L. Jackson and Angela Bassett.

The Mountaintop, presented in honor of Black History Month, is worth the trek!

Photo credit: I C Rapoport.
Posted by donloeslowdown.blogspot.com at 10:45 PM