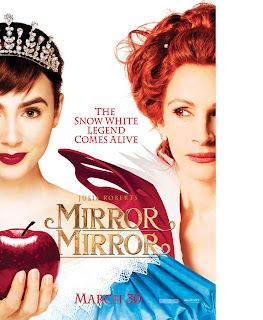 By Darlene Donloe
Julia Roberts explores her dark side as she plays the evil queen in the comedy, Mirror Mirror, opening nationwide on March 30.

Mirror Mirror, a comedy directed by Tarsem Singh, is a twist on Snow White, one of the most beloved fairytales of all time.

When Snow White’s mother dies, her father (Sean Bean), the King, decides to remarry. Unfortunately he marries a woman who hates his daughter.  When the king disappears, the evil queen makes it her mission to make Snow White’s life a living hell.

Of course, this story wouldn’t be complete without a prince, played by Armie Hammer (The Social Network). Of course, the Prince becomes smitten with Snow White, played by Lily Collins (The Blind Side).

Lets not forget the seven dwarfs.  Well, to be politically correct, we’ll call them little people.  The little people live in the forest and occasionally rob people. It all makes for good, clean fun tha will probably be a hit with kids.

I recently caught up with Roberts at the Casa Del Mar hotel in Santa Monica, Calif., and asked her questions about her latest role.

With her long, brown tresses resting gently on her shoulders, the Academy Award®-winner, dressed in beige, flat shoes and a cream-colored pant suit, was in rare form. 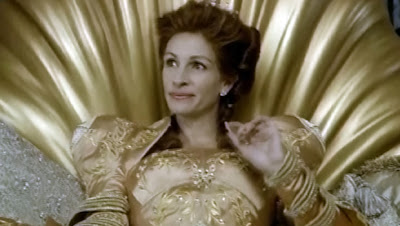 JULIA ROBERTS STARS AS THE EVIL QUEEN IN 'MIRROR MIRROR'
Q: Do you have a favorite fairytale?

Q: You play an evil Queen. What is the most evil thing you’ve ever done?

JR: Lied to the press. But it was only one time.

Q:  The costumes in this film are fabulous. Your thoughts.

JR: They were stunning. They really are an intriccal part. They were completely original and authentic to what we were trying to accomplish.

Q: Talk about how you enveloped the evil Queen. Did you pattern her after anyone?

JR:  I’m happy to announce she’s not inside me. Without naming names I drew from some people I know.

Q: Did you want to do this movie immediately after reading the script?

JR: No, no! I didn’t have an interest in the movie. Tarsem lured me in his way. 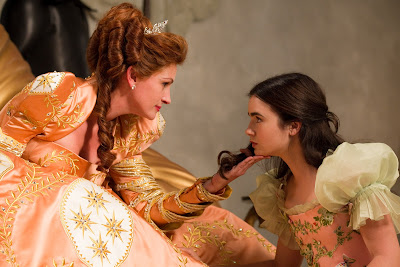 JULIA ROBERTS & LILY COLLINS STAR IN 'MIRROR MIRROR'
Q: Is it fun to play a villain?

JR: Fun. There aren’t any rules or syntax or reality that applies to her. I was a lot of fun. I didn’t have to worry about whether a person would really do this.

Q: You’ve said in the past that your family, especially your children, don’t watch a lot of television.

JR: Those cozy nights before bed we spend as a family and Before you know it, it’s time for bed. I love movies and a great deal of television. For us, there is a time and place for it. Stories, poetry and talking.

Q: When you were first starting out, did you ever encounter evil from other actresses?

JR: Yes, but I wouldn’t say it was just actresses.

Q: What did Tarsem say to convince you to do the movie?

JR: It’s just a feeling I have. I’m such a fan of Tarsem’s and so when I heard it was his movie. I thought he had a great take on it. So, I read the script. I was really taken aback.  Off we went. 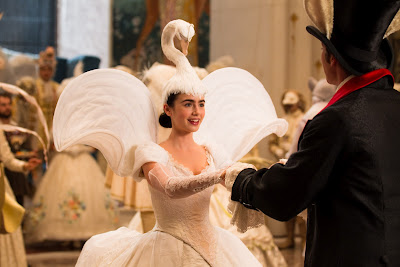 LILY COLLINS STARS in 'MIRROR MIRROR'
Q: The Queen uses some weird concoctions to keep her youth. What do you use?

Q: Is there someone in your life that you know you can always go to to get the truth?

JR: I always want to hear the truth. I’ve always felt that way. I have an amazing family and a great group of friends. That’s what I look for. That’s what I expect.

Q: There is a second film coming out with the same subject matter. Is this like unringing the bell?

JR: It’s not about unringing the bell. It’s giving it another tone. I think people like variations on things.

KIMBRA TO RELEASE US VERSION OF DEBUT ALBUM VOWS MAY 22, 2012

Posted by donloeslowdown.blogspot.com at 11:18 AM No comments: