THE RHYTHM AND SOUL OF FELA! IS ALIVE AND WELL AT THE AHMANSON!! 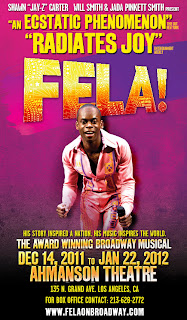 *Once “Fela!” starts, there’s no turning back.

Audience members should come prepared to strap themselves in for a high-octane experience that takes them on a musical and historical ride that is inspiring, informative and completely entertaining.

Currently playing at the Ahmanson, “Fela!” is the true story of the legendary Nigerian musician Fela Anikulapo-Kuti, whose affecting Afrobeat rhythms is said to have sparked and reenergized a generation. Afrobeat is a mix of jazz, funk, highlife (a popular West African horn-based style) and traditional Yoruba music.

Determined and undeterred, Fela followed in the steps of his mother, Funmilayo Ransome-Kuti, herself a civil rights defender. Through his pulsating music he challenged a military government he deemed tyrannical and dishonest and garnered a loyal following in the process.

Inspired by his mother, Fela defied a corrupt and oppressive military government and devoted his life and music to freeing his people and restoring their human dignity.

Fela’s story is both provocative and controversial. 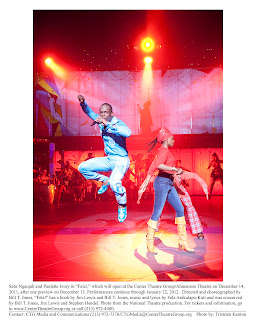 It’s the ’70s and Fela, arguably one of the hottest and most popular musicians in Africa at the time, has a club called The Shrine. Club attendees were privy to a new sound Fela dubbed Afrobeat, which was a pounding eclectic rhythm that was clearly infectious. It was mixed with what some called incendiary lyrics about the repressive military dictatorship that ruled Nigeria at the time.  His music eventually found its way around the world, not surprisingly igniting a rather contentious relationship between the musician and the government.
Fearless of government reprisals, the iconic composer and performer wasn’t afraid to die for what he believed. He urged others to fight repression as he amassed a small army of his own and even surrounded his compound with electric wire. 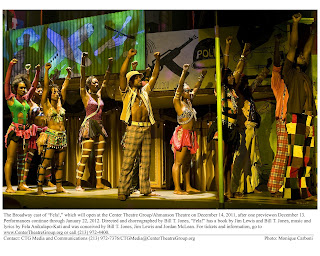 An endearing, feared, reviled (by the government) and revered political and musical figure in African history, Fela’s story is not only told through music, but also some incredible dancing – choreographed by Tony-Award winner Bill T. Jones. Jones also conceived, directed and co-authored the book to the biographical musical.
Not an easy story to turn into a musical, the producers, directors and cast have essentially hit a home run.

This is a tough (in every sense of the word) show with an emotional subject matter, but the pay off is worth every drop of sweat and tears the actors exude.

The show moves from explaining Fela’s musical influences, to how he went about creating his unique sound. Honing his craft in New York, London and Los Angeles, Fela inhaled and digested the Black Power movement in America through a woman named Sandra Isadore who opened his mind to the writings of civil rights icons Martin Luther King, Jr. and Malcolm X. 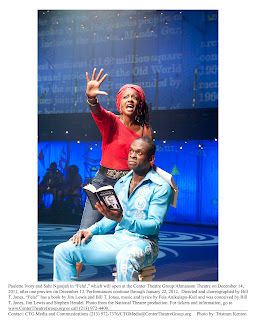 Paulette Ivory is intoxicating, stealing the show the moment she opens her mouth to sing the role of Isadore.  Her voice is like buttah! She is a force who commands the stage. Kudos!

The show, produced by Shawn “Jay-Z” Carter and Will & Jada Pinkett Smith, is driven not only by the music and the choreography, but also by some powerful performances.

Sahr Ngaujah, (who was nominated for a Tony Award for his performance), is stunningly brilliant and engaging in the role of Fela. He draws the audience in with an authentic presence that fills the stage. His magnetic personality paired with his robust performance effectively carries the show from beginning to end.

Melanie Marshall is equally impressive, portraying Fela’s fearless and unwavering mother, Funmilayo. She gives a bold, yet subtle performance that is affecting and gut-wrenching.

There is no weak link in this show, making Fela! a satisfying theatrical experience.

The dancers, with their enviable firm, elongated and beautifully cut bodies, are full of inexhaustible energy.  Like free spirited gazelles they move about the stage pushing the story forward with their technically precise, yet free-styled gyrations. 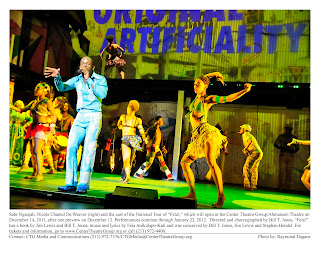 The efficient and splendid set design, mood lighting and costumes assist in making this show a full package.
And, the music, of course, is exceptional!

Kudos to everyone involved.

The musical opened on Broadway at the Eugene O’Neill Theatre, Nov. 23, 2009, after an acclaimed run Off-Broadway in 2008.

Fela!, directed and choreographed by Bill T. Jones with a book by Jim Lewis and Bill T. Jones, and music and lyrics by Fela Anikulapo-Kuti.