A Review: Once Upon A Time....In Hollywood 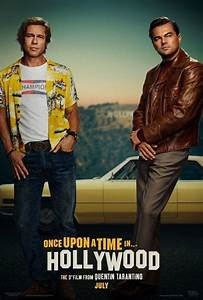 Quentin Tarantino’s latest and ninth film, Once Upon A Time….In Hollywood, set to open nationwide July 26, may well be one of his best.

It’s well written, well-directed, well-acted and has the accouterments to make it a winner.

There are moments in the movie, without spoiling any plot points, where the audience really doesn’t know which road Tarantino is going to take. He builds tension in all the right places and just when you’re sure where he’s about to go – he does a signature 180 move that leaves the audiences scratching its head and wondering where he’s going next.

It’s hard to review a film when you can’t talk about the best parts because you’ve been sworn to secrecy.


Just know that you're going to enjoy the ride from beginning to end. You have '60s Hollywood, black and white TV, AM radio, and hippies with hair under their armpits. There are some drop-dead funny ass moments in this flick that will probably become iconic.

There are three stories going on at the same time that center around Margot Robbie, DiCaprio and Pitt’s characters individually.  Tarantino jumps around between the three bringing it all home in the end – which is one of his signature moves.

The film, Tarantino’s love letter to Los Angeles is a kind of buddy comedy set in 1969 during a time when a TV star named Rick Dalton (Leonardo DiCaprio) is coming to terms with his career’s mortality. I use the words “buddy comedy” loosely because there is some Tarantinoesque gratuitous violence. Once a hot commodity when he was star on the hit television series, “Bounty Law,” Dalton’s popularity is starting to wane and he’s not taking it well. He’s looking for a way to set the screen on fire again. DiCaprio is a beast in a scene when, after completing a scene on the movie, he goes to his trailer and practically falls apart at what he deems a piss poor performance.  DiCaprio is brilliant in that moment.

This film tells the story of an incredible friendship between Dalton and Booth. Tarantino is a great storyteller. He's also incredible at character development. We get to know Dalton and Booth as they are separately and what they are like when they are together. Both turn out to special.

Cliff Booth (Brad Pitt) Dalton’s stunt double, driver (because of a drunk driving offense) and loyal friend has his back and occasionally pats him on the back to remind him he still has the acting goods.

Both Dalton and Booth are trying to rekindle their glory days – but in different ways.

Throughout the film, set against a backdrop of the Manson Family murders, we watch as Dalton tries his best to make the transition from television star to movie star. It’s no easy task. Enter Marvin Schwarzs (Al Pacino) a man with connections who is a fan of Dalton’s and decides to help him regain his rightful place in Hollywood.


Dalton decides to take the role of a bad guy in a movie and receives some rather strong advice from his co-star, an eight-year-old star played by Julia Butters.

When he’s not driving Dalton around, Booth is living a rather simple existence. He lives in a ratty motor home behind a drive-in movie with his dog, Brandy, who steals this movie. One day he sees a girl at a bus stop. Then he keeps seeing the same hippie girl around town dressed rather scantily. One day, when she is hitchhiking, he offers her a lift.


Margot Robbie is fantastic as Sharon Tate. She really holds her own in a movie with two superstars.

The film is filled with nostalgic undertones at every turn. There’s a meeting in Musso & Frank, there are 60’s television scenes playing on the tube featuring FBI, The Green Hornet and Mannix.

Kudos to Tarantino for the pairing of DiCaprio and Pitt who both outdid themselves, turning in stellar performances.

The look of the production is a wonder.  It’s for sure that if even one element was out of whack – the movie would not have worked. The costumes, the locations, and the cinematography are on point. The music ROCKS, but it always does in a Tarantino film.

Once About A Time….In Hollywood is not to be missed!

Posted by donloeslowdown.blogspot.com at 1:22 PM