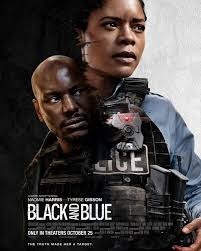 After a rookie female cop named Alicia West (Naomie Harris) witnesses and records on her bodycam - some fellow cops assassinating some drug dealers, everything turns Black and Blue, set for nationwide release on October 25.

Set in New Orleans, the film, directed by Deon Taylor (Traffik, The Intruder), is a fast-paced action thriller about racism and police corruption that keeps the audience on the edge of their seats.

West has been a rookie cop for three weeks. Prior to that, she was military – so she can hold her own – if need be.  New Orleans is her old haunt – but since became a cop she is persona non grata amongst the black people, including Missy (Nafessa Williams) (a former friend who even denies knowing her.

"You think you're black?  You're blue now!" those were sentiments of the people who live in the hood.

Once the narcs, Kevin (Reid Scott) and a really nasty narc named Malone (Frank Grillo) and who killed the drug dealers realize West has on a body cam, they shoot her, but not lethally. She manages to get away – only to be hunted like a dog.

The race is on to find her and stop her from getting back to the station and uploading the video.

When she realizes even her own partner may be in on whatever shenanigans the bad cops have in play, her only support and trust comes from Mouse (Gibson), a man who works at a local market who cares enough to help her run from the cops.

To make West a bigger target, the bad cops upload her photo and declare that she is the one who shot and killed the drug dealers, one of whom is a big bosses’ nephew named Zero.

The movie comes down to exactly what its title purports. The situation is Black and Blue.  The people in the hood no longer respect Harris or have confidence in her because she is, what they deem, on the side of the enemy in blue.

The one bit of business I couldn’t figure out was why – whenever West was able to use a phone, did she not call television stations to meet her at a specific location so they could upload the video and then she’d be safe.  Well, I guess that would have ended the movie rather early.

Director Deon Taylor has crafted a masterful, gritty drama that draws in the audience at every turn.  Taylor shot it mostly in the dark. A pivotal scene, he says, was shot solely using car lights. It makes for a very dramatic effect. The city of New Orleans is quite a provocative character in this movie.

The cast is solid. Kudos to Naomie Harris and Tyrese Gibson who both turn in stellar performances. Frank Grillo is brilliant as an evil narc.


Posted by donloeslowdown.blogspot.com at 12:05 PM