There's A Lot Of 'Mindplay' Going On At The Geffen

The phrase, a meeting of the minds, takes on a whole new meaning when you experience Mindplay, currently playing in the Audrey Skirball Kenis Theater at the Geffen Playhouse through December 18, 2022.

Mindplay is described as a love letter to the imperfect mind. 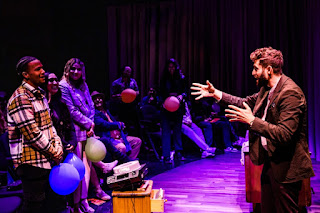 In the 80-minute event, Vinny DePonto, a Drama Desk Award–nominated theatermaker and mentalist, brilliantly leads the audience on a raucous romp through the back channels of their innermost thoughts exploring the fragmented and flawed nature of our memories, and asks the audience to question whether they can trust the voice inside their heads. 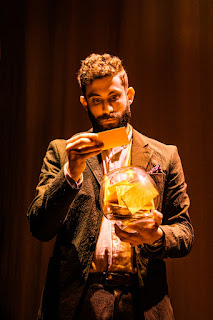 In Mindplay, directed by Andrew Neisler, the audience’s thoughts literally play a leading role in the show.

From the moment you enter the theater, it’s clear something different and exciting is about to happen.

Audience members are handed a small envelope and pencil and asked to write their first name, last initial, and one of their deepest thoughts or memory. 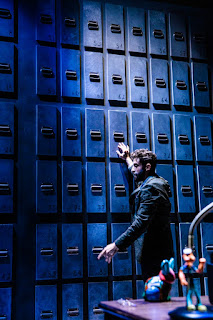 Audience members can be heard asking out loud – “What is this for? What are they going to do with this? What’s going to happen?”

Once they enter the intimate theater, the audience is met with a question written on a white curtain, “What’s On Your Mind?”  It’s clearly food for thought. 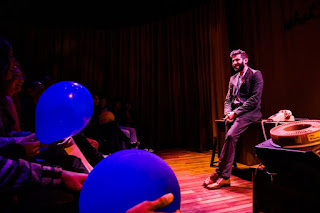 What takes place next is simply mind-blowing.

A white curtain opens and out walks a handsome, bearded DePonto nattily dressed with a sweet smile that, undoubtedly, knows much.

He starts by assuring the audience that the chord we see hanging from the back of his head does not give him any kind of advantage in what he’s about to do. It is solely a mic, he promises – patting his head. He also assures the crowd that he has not placed any plants throughout the audience.

He jokingly, or maybe not so jokingly asks that audience members not approach him after the show to ask, “What am I thinking.” He declares it doesn’t work that way. What he’s able to achieve squarely depends on the conditions which have carefully been arranged.

That bares out when an audience member he initially chooses to join him on stage is too embarrassed to come forward. Her partner then asks if he can take her place.  DePonto doesn’t agree with the change. He simply tells the audience member it’s OK if she doesn’t feel comfortable joining him onstage.

But those who decided to take the risk are stunned, overwhelmed, and appreciative after he reads their thoughts.

After agreeing to allow DePonto to read their minds, participants, not fearing public scrutiny, divulge their innermost thoughts to a room full of strangers. The revelations run the gamut.

DePonto, who said he has studied the mind for years, knew that one woman was thinking about a friend who had passed. Another woman wondered whether she could make a living owning her own company. A man was wondering if it was too late to get his pilot’s license. One woman’s memory was spending time at a lake with her son.

It was all warm and fuzzy and fascinating. 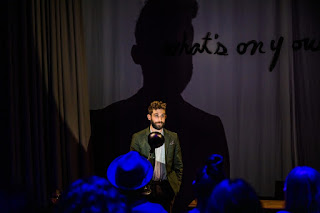 Mentalist Vinny DePonto weaves personal stories with general information about the mind while playing mind games with the audience.

It’s both frightening and intriguing to watch DePonto show just how easily the mind can be manipulated. It leaves you scratching your head and asking the question, “How did he do that,? and How does he know that?”

Of course, DePonto isn’t the first to manipulate the mind. In fact, he points out how the public’s minds are manipulated on a daily basis. Enter social media. Enter algorithms that somehow convince us to click on things we wouldn’t otherwise consider. Somehow they convince us that we need, want, and can’t live without whatever it is. It’s mindboggling!!

The mind is incredible!

There’s a bunch more I’d like to tell you but I’ve been asked not to reveal too much.

Mindplay is created and performed by Vinny DePonto, written by DePonto and Josh Koenigsberg, directed by Andrew Neisler, and produced with Eva Price.

The theater recommends arriving at least 15 minutes early as there will be no late seating for this production.

All Geffen Playhouse productions are intended for an adult audience; children under 6 years of age will not be admitted.

Posted by donloeslowdown.blogspot.com at 2:20 PM