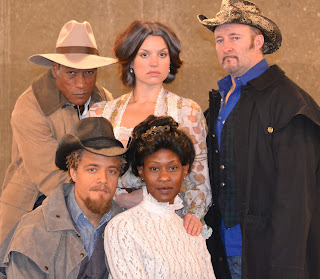 CAST OF 'PITY THE PROUD ONES'
The Robey Theatre Company (RTC) got ambitious with its world premiere of Kurt Maxey’s Pity the Proud Ones, a drama set in 1915 about an Irish father and his half-Black son.

The play, directed by Ben Guillory, who is also the artistic director and co-founder of RTC, takes place in St. Augustine, Fla.  Mulatto James Perez  (Dorian C. Baucum) is searching for his Irish father Martin O’Grady (Darrell Philip) at the town’s leading bordello run by Elizabeth (Caroline Morahan). Perez’s father owes him $3,000 and he wants it now so he can pay off some of his debts and start a new life with his love, Ella (Staci Mitchell).

O’Grady has been promising to pay back his son for a while, but, for some reason, has been stalling. He hopes to obtain some of it via America’s possible entry into World War I. 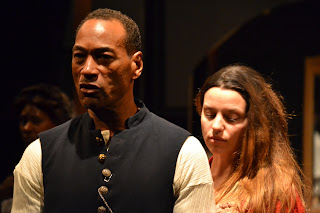 BEN JURAND and CAROLINE MORAHAN
Also part of the proceedings is Pettigrew (Ben Jurand), a mysterious man who runs the local bar and has an equally secretive relationship with Elizabeth.

'Pity the Proud Ones' speaks to people being so consumed with pride and resentment that they get in their own way and thereby stunt their own growth.

Guillory’s staging is unique, impressive and engaging. The audience, which is raised above the stage, actually looks down on the actors, sans one scene that is elevated above the crowd. He makes good use of the small space by flying furniture in and out from strategically placed curtains. It makes for an interesting and effective presentation.

For some scenes audience members, bathed in blue light, are made to feel like flies on the walls of a whore house. 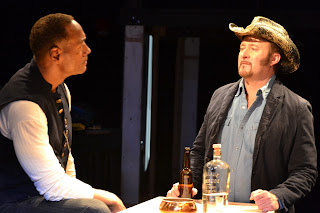 BEN JURAND and DARRELL PHILIP
On occasion some sight lines are obstructed for audience members in the second row, who need to sit forward in order to view some scenes. However, most of the direction works.

Kudos to Miguel Montalvo for an extraordinary set, to Kimberly M. Wilson for excellent sound, Naila Aladdin Sanders for period pleasing costumes and Alex Cohen for his emotional lighting design.