A Non-Traditional ‘All My Sons’ 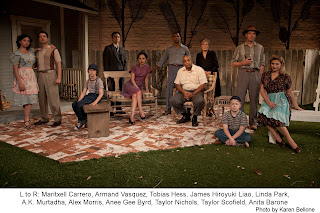 Arthur Miller’s All My Sons, is timeless.
The Matrix Theatre’s production, featuring a non-traditional cast may have just proven it for a fact.
The rich and engaging drama opened on Broadway in 1947 and won a Tony award for Best Play.  The intense American classic about post-war America and its effect on two families and their neighbors, centers on Joe Keller and Steve Deever, partners in a machine shop during World War II.
Apparently, even though some key airplane parts were defective – they were, in an effort to fulfill a war contract,  sent out resulting in the accidental death of several pilots. The story speaks to the question of responsibility to oneself, friends, partners and family. 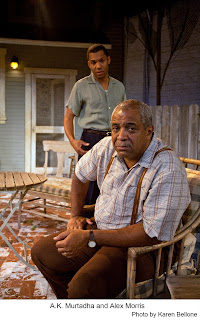 While the casting is impressive and proves a good story can be done with a colorblind acting troupe, it’s the solid acting that fuels this play.
Director Cameron Watson has assembled a cast sans a weak link. Each member of the cast makes their own notable mark.
Alex Morris, who is black, leads the cast with his unforgettable, gut-wrenching portrayal of Joe Keller, the patriarch of a family facing some tough times. Morris engulfs the role, filling the stage with Keller’s pride, angst, shortcomings, faults, guilt, but especially love and devotion for his family.
Anne Gee Byrd, who is white, is brilliant as Kate Keller, the matriarch and wife of Joe, who gives new meaning to standing by your man. Byrd’s emotional portrayal of the torn and grief-stricken mother, Kate Keller, is palpable. 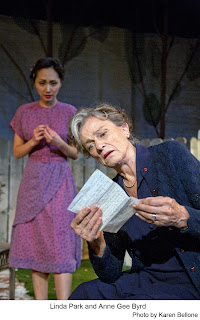 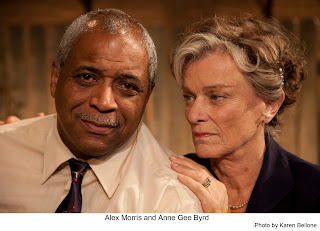