Kila Kitu Directs 'Frilly', A Comedy On The Verge 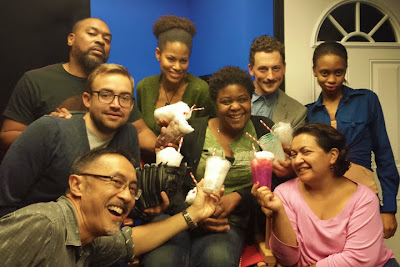 Frilly is a comedy on the verge of hysteria about the soul-sucking suck of growing old, growing up and the birth of the ice cream Sundae.

That tagline alone makes the latest work by Sigrid Gilmer (Black Simulacra, It’s All Bueno, The Hub of the Universe, Black Girl Rising, Axiom and The Great White Way) a must see.

A workshop performance of the show is set to take place Dec. 7, 8, 13 and 15 as part of the Skylight Theatre's LAb Works, which consists of a festival of plays performed by professional actors and directors as workshop productions in repertory and a Reading Series.

Frilly is set in the beginning of the 20th century where Reverend Jonathan Moore is having a spiritual crisis and his daughter, Lily, has decided to become a lady. On their path to discover who they are and what they have become, Rev. Moore and Lily must contend with a sickly librarian, noisy shopkeepers, the after effects of Laudanum, a very handsome boy and an abundance of fizzy creamy drinks.

On the Skylight Theatre Company website Gilmer explained why she was inspired to write Frilly.

"Couple of years back, I was having dessert one night with friends and someone mused about the origin story of the sundae,” says Gilmer. “Out came the Iphones. From the vast information provided by internet on the sundae, several phrases stuck in my head. "Righteous very much against what they called "sucking soda." (1) "A city ordinance not only prohibited the consumption of alcohol, but legislated against the growing "Sunday Soda Menace. Blue Laws which said that ice cream sodas could not be sold on Sundays because they were too "frilly." (2) I was left wondering what kind of mind finds perversion in an ice cream soda?”

Kitu is also a member of BWSOTU (Black Women State of The Union), along with Lee Sherman, Ayana Charr, Michelle Flowers, Lony'e Perrine, Nataki Garrett and Tamika Simpkins.  The group, founded in 2008, is comprised of creative activists who seek to empower Black women. Members are award-winning actors, writers, producers, and educators who seek, through theater, to effect positive change about the perception of Black women.

I caught up with Kitu recently to discuss the show and why she was interested in directing. 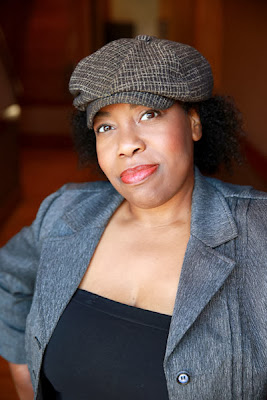 DD: I love the tagline for the show.

KK:  Yeah, me too. It’s a fun piece. A romp. On the first read you are cracking up. You pray the audience will be along on the ride. It’s hard to read because tears are coming to your eyes. You don’t know how you’re going to read it. It’s a funny and interesting take on life.

DD: What kind of writer is Sigrid Gilmer?

KK: She likes to turn things upside down. It could be complete melodrama or a midlife crisis. She has a style that makes you laugh.

DD: So you’re not acting in the show?

KK: No, I’m directing it. Originally I was playing a character named Claire. I think everyone can identify with being in a fog. Sometimes you think you’re in a relationship and you think it’s one thing, but it’s another. It’s another society fog.  There is waking up. You’re free. You wake up and you haven’t done anything you thought you would do, or intended to do. It’s about waking up and realizing you can do whatever you want. Do I do it the way my parents did it? I can’t tell if they’re happy.

DD: A lot of people think once they reach a certain age, they have to forfeit their dreams.

KK: Being in your 40s and the 50s is not the end. It doesn’t mean you can’t still meet your goals. Maybe they weren’t the ones you wanted to do in the first place. Our society puts too much emphasis on some things and then says that some things need to be completed by a certain time. Society says that by a certain time we will have our stuff together.

DD: Do you have your stuff together?

KK: I’m still working on it.

KK: It’s a hard question. When there is a good play in front of me it’s a toss up as to whether I want to act or direct. I stepped back from acting this time because I couldn’t do both. I don’t know what attracted me. I don’t have an answer for it. I do know that as the director, what I saw in my head has come out on stage.

DD: Do you find yourself going through changes just like the rest of us?

KK: Of course. I always thought I’d have all the roles. I’ve always played older. I’m nowhere near where I thought I would be. I have to remind myself it’s OK, it’s about the journey. It’s about finding the next thing and moving forward. 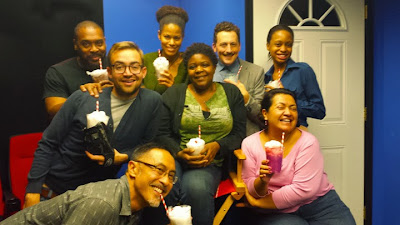 DD: What about reaching goals?

KK: If I haven’t reached a goal, that’s on me. I’m the only person responsible for my happiness. It’s incumbent upon me to look where I am and be happy.  I do find that all of the women who were my age said they were comfortable with themselves. I’m feeling that.  I look forward to being on the other side where I can say I’m completely comfortable.

DD: Do you think it’s a woman thing?

KK: I think men go through the same thing. The breakdown of what society has been telling us what we should be. I don’t have to be this type of beauty. I can be my type of beauty. I can change careers. I think it’s true for men as well. At a certain point they can go, “Oh, I can get married or not.”  Men think they can still play. It’s slightly different because they have that breadwinner thing they have to deal with. It must be weird. You can be at a point where you should be the breadwinner.  Their midlife crisis is more obvious. They buy the sports cars and start dating people that are way too young for them. Whereas women, I think our crisis is more internal. Crisis puts a negative spin on this time.

DD: What will audiences see?

KK: It’s a workshop. It will be tech light. It will be completely about the words. They will see hysteria and experience pop culture references. People in their 40s and 50s will get it, which is brilliant since that’s what the play is about. They will see people drifting through life. It will be a representation of themselves in one way or another. Some will identify and laugh and say, “Yeah, that is true right there.”

DD: Talk about working with Sigrid Gilmer. What do you like about her work?

KK: She’s part of the BWSOTU family. She’s worked with us twice.  Taylor Hawthorne is part of this Labs Work. She produced a short for BWSOTU.  We also consider her part of that family.  We consider ourselves as her players. She tends to grow people. You don’t even have to read the script, you know it’s going to be fun.

DD:  There aren’t a ton of black, female directors. Do you feel a sense of responsibility?

KK: I think other people like Shirley Jo Finney (the road weeps, the well runs dry/ In the Red and Brown Water) could speak to that. I haven’t pursued it as a profession. It’s just that I want to see this happen.  I’m not qualified to speak on that. When I direct, I don’t feel pressure being a black female director probably because the pieces are multi-cultural. I want to make sure the talented people around me have a creative outlet.  When I do something I like it to reflect the ethnic makeup that is real, not because I’m a black female director.  I’m a black female creator.